It’s Monday September 13th, the first day of the Parliamentary session. At 2 PM, a small group of people appear on the Federal square carrying a table, a couple of benches, and enough cookies and coffee for a large family. Actually, they do look like a family, from grand-parents to grand-children.

If you’d expected them to cosily settle on the square, you’d be surprised to see them carry on, step onto the middle of the road just in front of the Parliament, and set up camp there, blocking traffic. Four of them take a seat, making sure to leave plenty of open seats for the guests they’re expecting.

Then, each of them takes out a tube of second glue, spreads its content on one hand as you’d spread butter on toast, and lays their hand squarely on the table. Glued on! Here to stay.

The rebels came to invite our members of Parliament for a coffee, and a difficult chat. 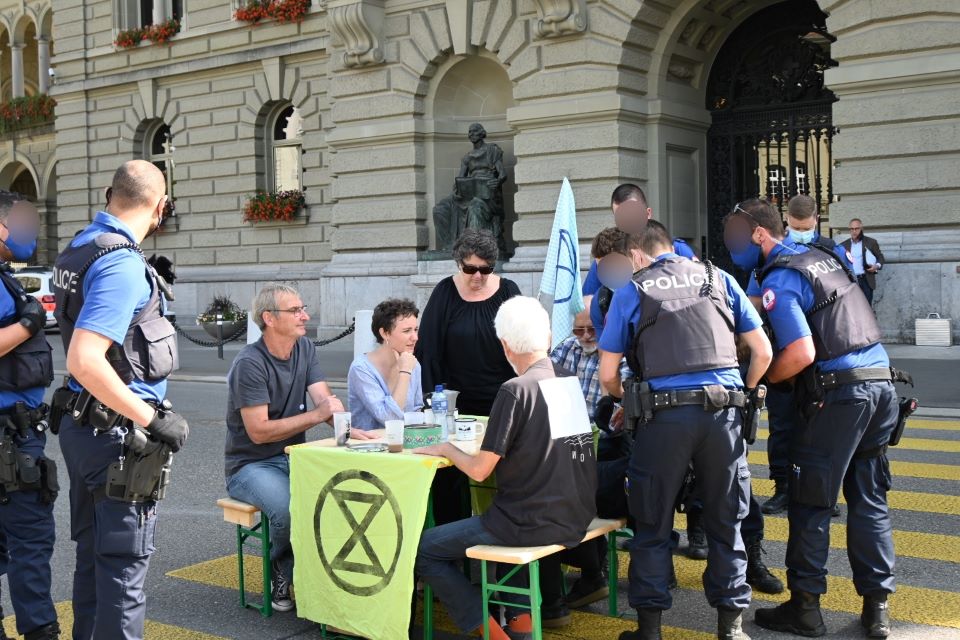 Policemen were more attracted to cookies than members of Parliament.

The letter that was sent in June to the Federal council still hasn’t been answered. In it, rebels, backed by over 4000 people on Campax, asked the government to tell the truth about the climate and ecological crises, and commit now to reaching carbon neutrality by 2025 ,with the help of citizens assemblies. If the Federal council does not respond appropriately by September 20th, the letter says, citizens will have no other choice than to create mass disruption in Zürich to make their demands heard.

Since emails and letters don’t elicit any reactions, the rebels coming to Bern were hoping to bait members of Parliament with coffee and cookies, and then ask for their help in getting the Federal council to get their shit together.

It’s perplexing to say that none of them stopped to discuss how to save humanity from impending climate doom, although many did give a friendly wave on their way to discussing more important matters.

The police, however, scratched their heads for quite a while before deciding on the best way to arrest the coffee-drinking, cookie-munching, glued-on rebels, who therefore blocked the road for over an hour.

We invite you all to come and replicate that in the hundreds in the city center of Zurich.

The opening ceremony is on October 3rd, the sit-in starts on Monday 4th. Until we win. Because this is not a drill.

See you on the streets, rebels.

Policemen were more attracted to cookies than members of Parliament.

Willy Burri, a 68 year-old retired dentist, was one of the glued-on hosts of this parliamentarian coffee break. He says he is fighting for his grand-children, Lenny and Charlotte. “Sitting there with my hand glued to a table in front of the Federal palace, I have to say, I felt very legitimate. Jean Paul Gschwind came to our table, and shared his opinion on the crisis. I was struck by how blind to the situation he was, and I’m afraid this represents the majority of our elected leaders. I fully support the Extinction Rebellion’s first goal, which is to tell the truth.”

Sophie is 20, and is impatiently waiting for this autumn to start a university degree in sociology and German. She was arrested during the action: “I joined because I liked this idea, of showing that we’re very ordinary folks, open to meet and chat. We belonged to all age groups, everyone was very friendly. Among us was an old lady with a walking stick, who let herself be arrested. The policemen escorted her to the police car in a very considerate manner and helped her climb onboard.”

The rebel with the walking stick is Catherine Froidevaux, a 72 years old pensioner from Nyon. “Getting arrested is easy for us, because as pensioners, we can afford to have a criminal record, and if needs be, we can afford to pay a few fines without risking going hungry.”

About François, her partner, she says: “He always was a lot more respectful than I was of laws, and “what is proper”. But very quickly he wanted to take part in civil disobedience actions. Yesterday he took a big step by agreeing - alongside me - to be arrested. But it must be said: we were in excellent company!”

This was not Catherine’s first action, and she concludes: “This action was really chill. The participants were fun and the police were friendly. I’d say the highlight for me was when I quickly turned my phone on for a selfie in the police car !” 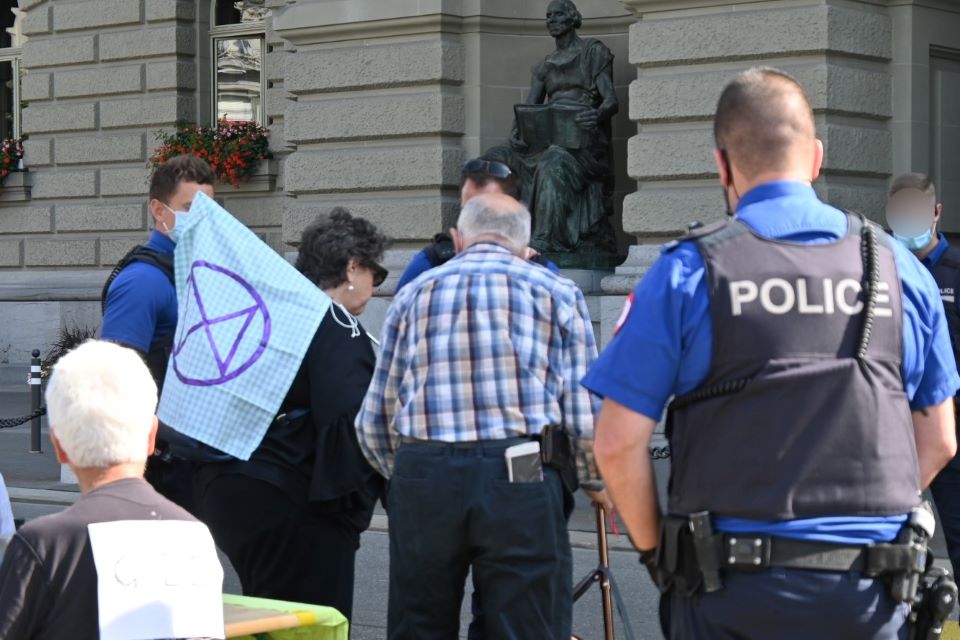 Catherine, François being arrested with flag and walking stick.