The latest IPCC report was the last one that could still influence whether or not we stay below 2 degrees. Soon, if we don’t turn things around, we’ll be committed to a hostile planet.

You know what this means. The time for climate reports is over. It is time for a climate revolution now, or we lose everything.

Over 1200 scientists stated this loud and clear during a worldwide Scientist Rebellion last week. They caused disruption in over 25 countries, including Switzerland.

Mass occupations are sprouting all over the place. XR UK and allies are currently shutting down both London streets and oil facilities, XR France are about to take Paris on the 16th, thousands of indigenous people set up a camp in Brasilia.

Small groups of highly-committed people are launching coordinated motorway-blocking campaigns in over 10 countries - including here. Renovate Switzerland’s first action on Monday already caused quite a commotion, and they’re just warming up.

Everyone is finding their place in this uprising. XR Familles was thrilled by the large participation in their “kidical mass” demonstration in Lausanne last month!

Look up. See the rebels gathering around you. Join them. You’ll find everything you need for that in this newsletter.

With love and rage,
Anaïs, Sanja and Marie, the newsletter team

New to the rebellion? This is how to get started 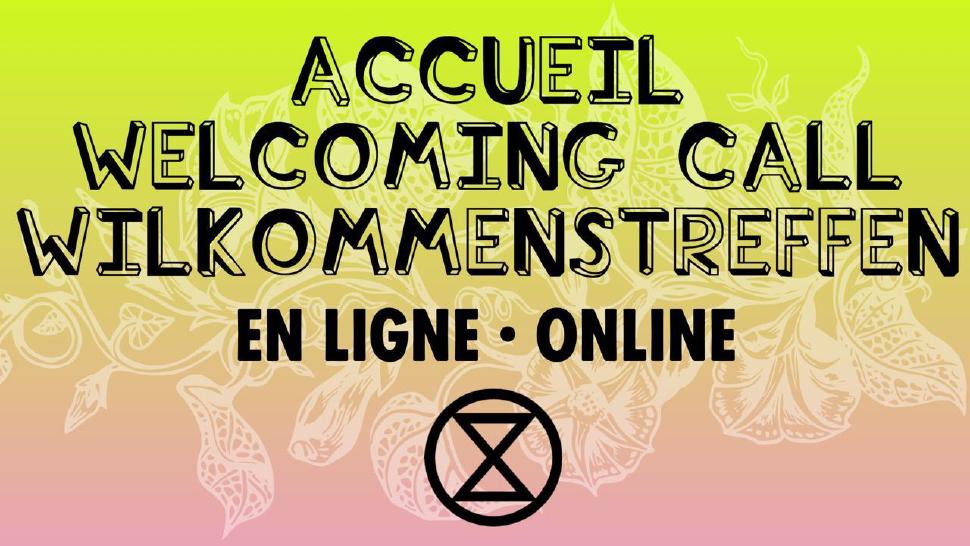 Join the upcoming welcoming call: the climate catastrophe freaks you out and you don’t think the solution will  come from our politicians, but from the peaceful pressure of ordinary people like you and me? Do you want to know more about how you can participate in what is becoming the largest civil resistance movement in the country? Then this is the meeting for you! The nice and beautiful (hell yeah!) rebels from the integration team welcome you online on April 20th at 7pm to answer all your questions, orient you and give you all the keys to start your involvement in the rebellion.

➡️ Register now and make your first step in the rebellion! (That’s the hardest one we promise!) 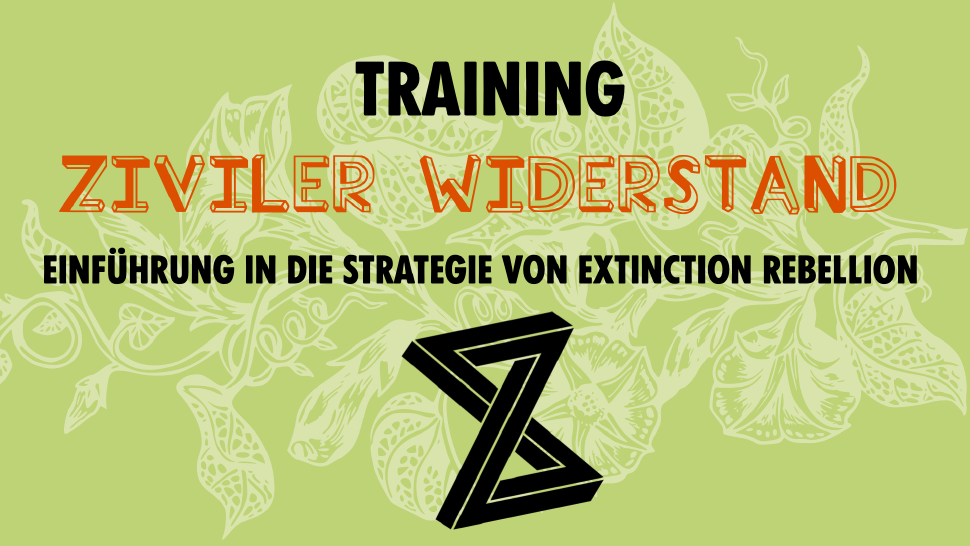 On Monday and Thursday this week, supporters of Renovate Switzerland blocked the A1 motorway, and the 6 lanes of Pont du Mont-Blanc in Geneva. Some of them glued themselves to the road, stopping traffic for over 2 hours.  12 were taken into custody, and released after a few hours. The campaigners instantly made it into the media on both sides of the Röstigraben as well as abroad.

The day after his first-ever arrest, Christian Anglada told Radio Chablais why renovating Switzerland is a complete no-brainer: “Insulating homes benefits everyone: it cuts 60% off your energy bill so it’s good for each citizen, it will create jobs so it’s good for the economy, and heating is the second biggest source of CO2 in Switzerland. And on top of that, we mainly use gas which makes us dependent on Russia.” Three days later, Christian was arrested again.

And the campaign is only just starting. “We’ll get off the road as soon as the Federal council commits to renovating a million of leaky homes before 2040”, said Léa Zuchinetti, 23, on national radio show Forum, a few hours after being released from custody. Three days later, Léa was back on the motorway.

Renovate Switzerland holds weekly online public meetings, and is organising in-person conferences all around the country. Find the dates on their website, and sign up for their newsletter. 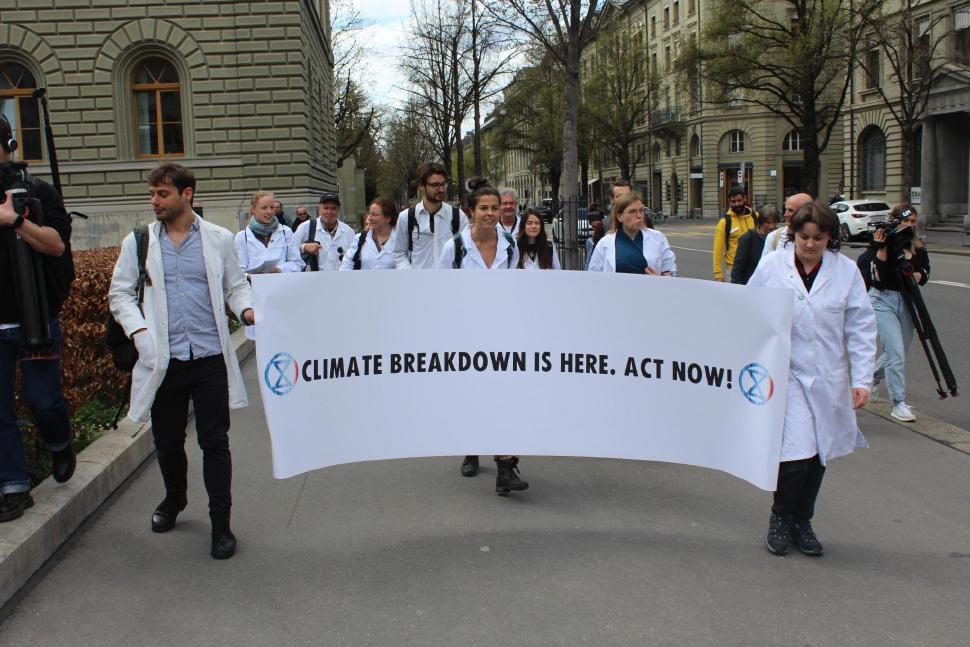 The week following the release of the IPCC report, well over a thousand scientists all around the world decided they’ve had enough: enough of being ignored, enough of governments not acting on the climate and ecological crisis. Scientists from Australia to Zimbabwe left their desks and engaged in civil disobedience: they targeted governmental, scientific and corporate institutions, many risking arrest.

In Panama, scientists protested at US, UK and German embassies, demanding the end of fossil fuels, and major financial support for transition to a sustainable future for the Global South. In Spain, 80 scientists and their supporters threw fake blood on the facade of the National Congress, and staged a peaceful sit down protest on the stairs. In Germany, 15 scientists blocked a bridge in Berlin for four hours. In Switzerland 18 scientists marched to Bern to paste climate science on the walls of the Federal Palace.

➡️Check out the Swiss action video here, and others here.

Scientist Rebellion aims to give credibility and courage for all climate activists world wide. “We need a billion climate activists. I encourage everyone to consider where we are heading as a species and to engage in civil disobedience. The time is now”, says Dr. Peter Kalmus, NASA climate scientist, and rebel who got arrested during the action week - by nothing less than a troop of 100 LAPD police in full riot gear! The force needed to silence the truth?

This was the largest civil disobedience campaign by scientists in history. So far! To join the global Scientist Rebellion for the next round, visit the website, or email directly to the Swiss branch: scientistrebellion_ch@protonmail.ch. 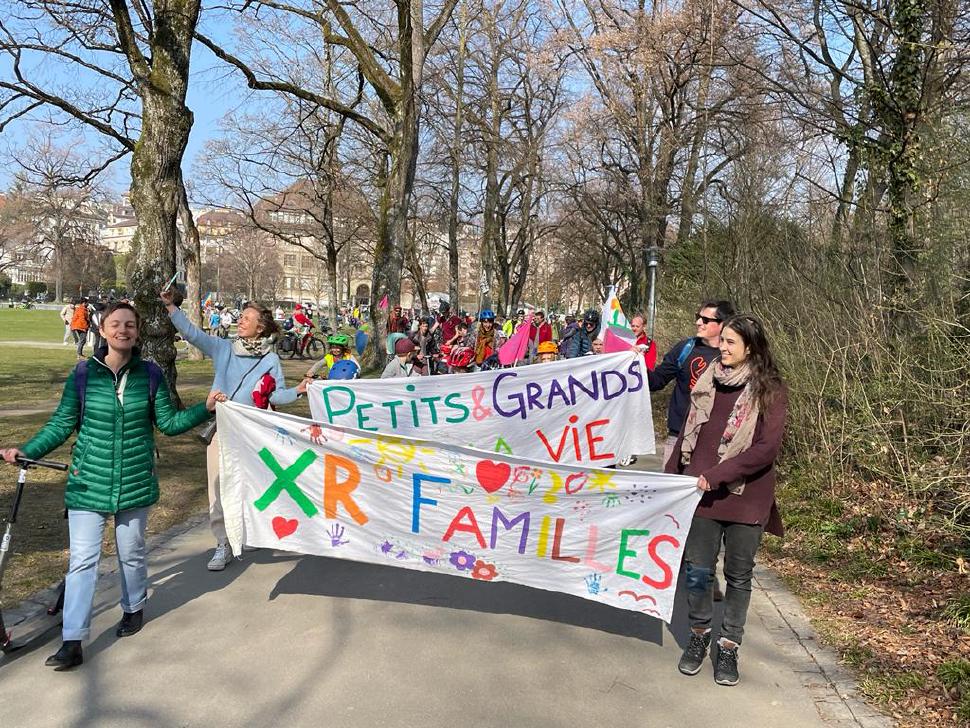 On a sun-filled spring day in March, over two hundred rebels took over the streets of Lausanne, on bikes and scooters and skateboards, some also in strollers and baby carriers. Extinction Rebellion Familles organised a joyful and colourful demonstration that drew in families from all corners of Switzerland.

➡️Check out the beautiful video to hear the voice of our smallest rebels and their kin!

If action as a family calls to you, visit the XR Familles website to learn the next meeting dates, or email: xr_familles@riseup.net. 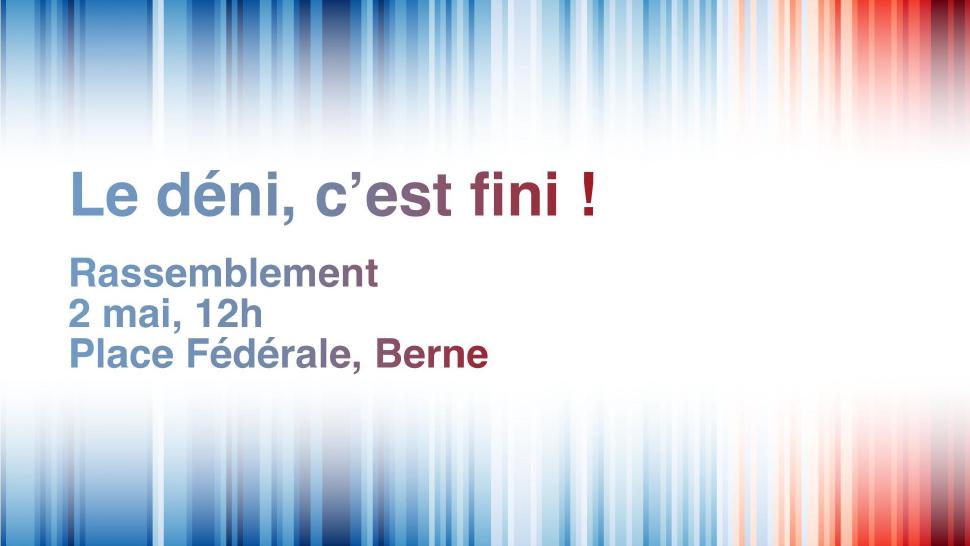 Following Guillermo Fernandez’s hunger strike last fall, Swiss parliamentarians have been invited to attend a training session on the pending climate and environmental disasters. It will be given by the Swiss Academy of Natural Sciences on Monday, May 2 at 1:30 pm at the Federal Palace.

The session is optional, so after this day it will be blatantly clear who is taking the emergency seriously enough to attend and learn about it. This is a good moment to show up and hold the politicians accountable!

➡️Let’s be numerous on the Federal Square in Bern on May 2nd at 12pm.

This is happening in the court

In connection with the actions on the Quaibrücke (June 2020) and the Rebellion Against Extinction (October 2021), a large number of trials are underway. After the first two trials in May 2021 and March 2022 (both times conviction for coercion), two more defendants had to stand trial this week  and they were found guilty. Next court dates are scheduled for the end of April and the beginning of May. In total, about 75 people already have an open case, another 75 people who were arrested during the actions have not yet received any news from the prosecution.

The defendants are accused of ‘coercion in the sense of Art. 181 StGB’. By attempting to draw attention to the climate catastrophe through the means of non-violent civil resistance, they forced numerous other road users to “unintentionally take a diversion or get stuck in a traffic jam and lose time” (quote from a penalty order).

All defendants are assisted by our legal team, which has developed a defence strategy together with several lawyers. In addition to the demand to recognise a state of emergency, we oppose the ‘chilling effect’ clearly intended by the police and the prosecution: citizens are to be scared off by disproportionately harsh measures and punishments, so that they and others will not dare to make use of their fundamental rights in the future.

Your support is incredibly valuable - here’s how you can help:

➡️Come to the trials in large numbers.
➡️Help to cover the costs with a small contribution.
➡️ We are many and more processes will follow - we will keep you informed via our info channels (for current dates visit our process calendar).

Want to know more about the topic? On 6 May 2022, a symposium will be held in Bern on the topic “Does Swiss law enable us to defend the climate?
Suscribe here: Symposium - Klimaprozesse und Umweltnotstand

The rebellion is sprouting and branching like a living thing, not a centralised organisation or nicely-behaved association, far from a business with quarterly reviews… It may be hard to grasp it all  into words, and there are not always cameras to capture everything. But numbers don’t lie! Here some from the past month of Swiss climate action:

Fresh rebels in XR welcoming calls: 26
Seasoned rebels in trial for previous actions in Zürich: 3
Rebels taken into custody for sitting on a motorway: 12
Big and small rebels at the Kidical Mass in Lausanne: over 200
Scientist rebels pasting posters in Bern: 18

WANTED! The social media team badly needs reinforcement! Especially for Instagram. To join our friendly bunch and help for a few hours each week, write to Josi: josianne874@gmail.com