They announced it - and then they did it! Today, a hundred people once again brought Zurich’s central Uraniastrasse to a standstill, calling on passers-by to find the courage to rebel against a government that is leading them straight to disaster.

Two sites were occupied - we’ll give you a guided tour!

In this Rebel Daily, we also give you news of the brave people arrested on Monday. You prefer the video version? Here you go!

As for tomorrow… The plan remains the same. Uraniastrasse, 12, sit-in. And its success depends on you!

It is a real privilege to amplify the actions and voices of the glorious rebels on the ground, and we are very grateful for that chance!

With love, rage and admiration,
Anaïs and Josie, for the media team 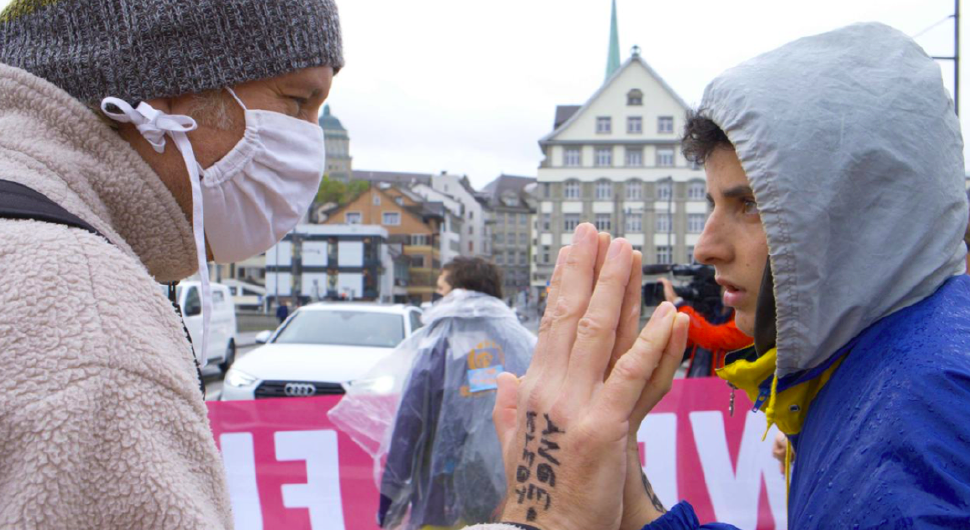 Noon - A small troop of about thirty rebels showed up on the Rudolf Brun Bridge, carrying a banner as rosy as its slogan was blunt: “WE ARE FUCKED”.

The police were quick to redirect traffic.

Soon the rebels were joined by others. Despite the light rain, many passers-by stopped to enjoy the sound of a guitar, or ask questions - it must be said that the rebels, of all ages, very cheerful and serene in the face of the frankly impressive number of fluorescent police officers, formed an unusual picture.

Two rebels sitting on the road took out a tube of glue and glued themselves together, hand-on-hand. They could have been father and son, yet they didn’t know each other before today - one is from Ticino and the other from Bern. They became inseparable - at least until after their arrest, because they were taken away like that ! Not without difficulty, as they politely declined to get up ;)

Total: two hours of occupation and 10 arrests, each one acclaimed as it should.

The Rebel Circus at the Bahnhofstrasse

At the same time, the rain caused an improbable bamboo structure to mushroom out of the ground on the crossing with Bahnhofstrasse.

This airy, impossible structure served as a nest for two young rebels in high spirits, who called out slogans to the crowd from their hammocks. They hovered over the police, who surrounded them but didn’t really know how to dislodge these strange birds!

Very quickly, the atmosphere on Bahnhofstrasse felt like being at the circus. Many passers-by on their lunch break stayed for a long while with their nose in the air and their mouths open in front of the installation. David from the outreach team says: “At the beginning, there were quite a few people who didn’t want to talk to me. After a few minutes of watching the rebels in their beacon, they would come back themselves to get a flyer!”

It took the police and the fire brigade almost three hours to get through this headache and return the Bahnhofstrasse to its original state.

The clowns had a slight time problem. Yesterday, they were banned from Zurich for 24 hours.

Exactly 24 hours later, they were back - but no one was there anymore!

Ah well. Ever looking for ways to make themselves useful, they printed out some “Wanted” posters and set out to find the Earth that was lost yesterday. The people of Zurich don’t seem to have seen it, but the police told them they would let them know if they did!

134 rebels were arrested yesterday, and were kept together in two large rooms (split between women and men - about the same number of each). According to several testimonies, it was quite a party! One elderly rebel did have a dizzy spell because of the promiscuity - we send him lots of love and gratitude for his bravery.

About 50 people were kept overnight. At the time of the writing of this newsletter, there are still a good 30 people still in custody, and about to spend a second night at the station!

And they have been joined by the day’s new arrival: of today’s estimated 18 arrests, 10 will stay canned overnight.

👉 You have the right to rebel, too. So leave your daily routine and join us. We need everybody and we need you. Not later, now!